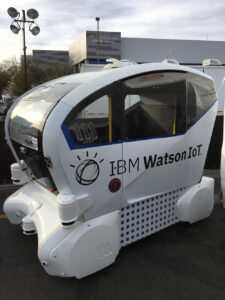 How IBM Watson Will Improve Your Morning Commute

IBM Watson isn’t known as a consumer-grade bot that works like Amazon Alexa or Google Assistant. It’s really meant to showcase the massive supercomputing prowess of the famous tech icon.

Yet, at a recent demo at the CES 2019 convention in Las Vegas, the powerful ‘super assistant’ proved helpful in an autonomous shuttle that did not have a steering wheel, brakes, or a gas pedal. It’s proof that self-driving transportation will be powered, at least in part, by your voice.

The demo took place in a parking lot and involved a company called Via, together with Comet and Aurrigo – showing not just how a shuttle might work but how you could request one as well. (Aurrigo operates autonomous shuttles in highly controlled settings like a college campus, but IBM Watson is not currently available in the shuttles.)

The idea is that, when someone jumps into one of these pods, they probably won’t know anything about how to run a touchscreen or even start the vehicle. They might be unfamiliar with how any of it works.

Andrea and Airbus: CIMON, the First AI Robot to Operate in Outer Space 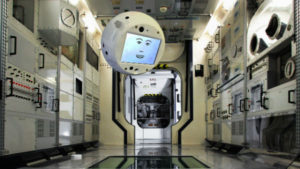 Andrea Electronics, the pioneer of digital array microphones and noise reduction software that optimizes the performance of voice driven applications, has announced that its DA-250 array microphone is incorporated in to the CIMON virtual assistant robot that will operate as part of the “Horizons” project on the International Space Station.

This will be the first form of artificial intelligence (AI) on an ISS mission. CIMON is an experiment overseen by Space Administration at the German Aerospace Center (DLR) in cooperation with Airbus as the prime contractor as well as IBM, Reichert Design and LMU Munich.

CIMON (Crew Interactive Mobile CompanioN) is a mobile and autonomous assistance system designed to aid ESA astronaut Alexander Gerst with his everyday tasks on the International Space Station (ISS). Together they will experiment with crystals, solve the Rubik magic cube based on videos and conduct a complex medical experiment using CIMON as an ‘intelligent’ flying camera.

Engineered Arts Ltd. designs and produces an ever expanding range of humanoid and semi-humanoid robots featuring natural human-like movement and advanced social behaviors. Their humanoid robots are used worldwide for social interaction, communication and entertainment at public exhibitions and attractions, as well as university research labs.

RoboThespian™ is a life sized humanoid robot designed for human interaction in a public environment.
With its web based interface controlling movement, sound and video, it is fully interactive, multilingual, and user-friendly, making it a perfect device with which to communicate and entertain.

RoboThespian™ was designed from the outset to provide a flexible communication medium.
Its Tele-presence feature utilizes VoIP video and audio conferencing technology for the operator to interact with people by way of a live conversation via the robot, whether it is being used for communication, research or entertainment.

Andrea Electronics worked closely with Samson to develop the new Go Mic Connect, the most advanced USB stereo array microphone in the market (see chart below). From acoustic and hardware design consulting, to creating the complete software suite to empower this new type of Microphone, Andrea continues to work with customers and partners to advance the stare-of-the-art of digital microphones.

As cloud based digital assistant applications like Google Now and Microsoft’s Windows10 Cortana become increasingly popular, Andrea’s microphone technology is ideal for enabling the natural language user interface for computers and the Internet of Things (IoT).